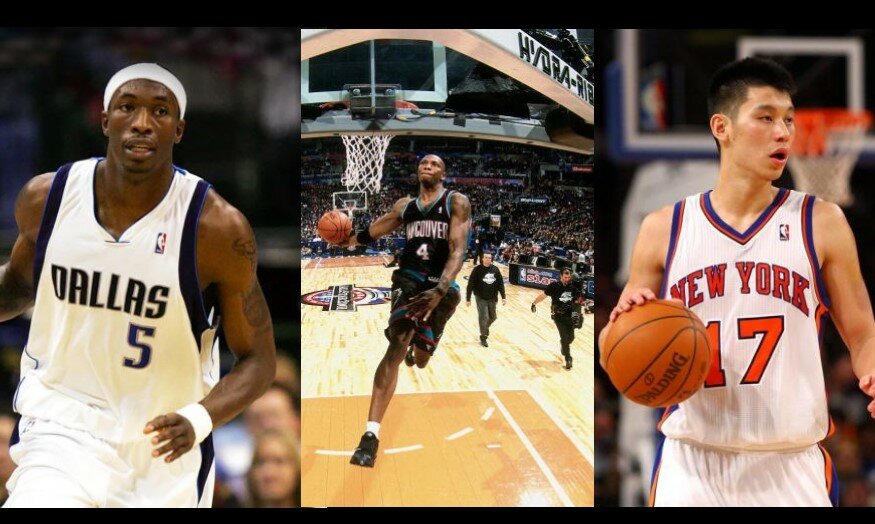 To score 25-30 points in one NBA game is not “that hard”. We’ve witnessed that some player can score even 50 points, like Tony Delk or Corey Brewer. But the tricky bit is that you constantly play on that level. That separates good from the best. Here are the players that could be very very good, but their “fame” lasted for one season. After that one breakthrough season, the completely disappeared and never played on that level again.

This shooting guard had not one, but two good seasons with the Knicks. In his rookie season, he was scoring almost 10 points pre-game and took one Rookie of the month award. The second year was also solid, but then he signed with the Raptors and completely disappeared from the NBA map. From 9,7 points per game he fell to 1,8 in his last season.

It’s probably a little unfair to put him on this list because he’s still playing. But when you’re compared with Big O and Magic in rookie season, and now you’re fighting for playing time in the Hornets, you know something went wrong. Maybe the best debut game of all-time. 22 points, 12 assists, 7 rebounds and 9 steals. He was Conference player of the week in his first week in the NBA! After an excellent rookie season, he injured his shoulder and never was the same again. Traded to Bucks, then the Bulls and now finally bench player in the Hornets.

High school Messiah. Wagner peaked even before he came to the NBA. Probably the best high school player USA has ever seen. Scored 100 points in one game and he was getting buckets with ease. After high school he had a solid run at Memphis University and then the Cavs drafted him. He was solid in his first year, little over 13 points but after that disappeared. After only three seasons Wagner left the League.

Bobby spent 11 years in the NBA, which means he got the talent and the quality to play in the League. But one season is standing out. In his fourth season, Bobby won the award for the Most improved player. He played for the Clippers and everything clicked for him. Enough playing time, small expectations and Bobby fought for the new contract. That resulted in 16,8 points, 5,9 rebounds in average. After that, his numbers started to fall rapidly and the changed three teams before he came back to Clippers to finish his career.

If you don’t know about this guy, I urge you to go to Youtube and watch his highligths. One of the best dunker of all-time in the NBA. Fantastic athleticism, unbelievable speed, and vertical leap but technically flawed. That cost him a bigger career. In his second season, he was at his peak, everybody saw an incredible raw talent but lack of practice is the main reason why Swift hadn’t had a better career.

Alongside Dirk, Howard was the best player in the Mavs. He even got one All-star appearance and in that season he had over 20 points per game. But unfortunately, he injured his knee and never was the same after that. His scoring average came down to 8 points, and Howard soon after that left the League.

No, this is not Mike James who played for the Suns this year. This Mike James was a solid NBA player. Twelve seasons in the League and he was a decent bench guy. But in one season he had an incredible year. When he played for the Raptors he had 20,3 points, 5,8 assists and 3,8 rebound in average. This is probably an All-star season. Like Simmons, Mike took advantage of the lack of any real talent in his team. He never came close to a season like that and just two seasons after he had 5 points per game.

Probably the best underdog story in the history of the NBA. We all remember the madness called Linsanity when he played for the Knicks. Lin played like an All-star in that period, like one of the best guards in the League. But after that madness, he never played on the same level. In Houston, Beverly took his place in the rotation, wasn’t very good in the Lakers either. Now he is constantly injured and he’ll probably never be the same.